Unfortunately, the XHose Pro line isn’t the best expanding garden hose around. This Dap XHose Pro Review will explain why you may want to look elsewhere.

Here we will look at the DAP XHose Pro line and consider the features, benefits, and drawbacks of this expandable water hose.

Here are the major features DAP advertises for the XHose Pro line of garden hoses:

The DAP XHose Pro works great… until it leaks, and you’re forced to essentially throw it in the trash because you can’t use it anymore! These hoses are rather expensive compared to other hoses, and one would think that with solid brass fittings, should last a long time.

Unfortunately, they don’t, and often start to leak just a few weeks after purchase.

The flexible design makes them coil up fairly tightly compared to a traditional garden hose, but they don’t really shrink in the typical sense of the word. When water flows through, they expand and become harder to coil; when water is removed, they coil right up.

There are several significant points of failure for the DAP Xhose Pro expanding garden hose that result in an overall bad design.

The most common point of failure is where those shiny brass fittings connect to the hose. The DAP XHose often leaks at that connection, as the flex of the hose wears against the brass fittings.

The flow valve is also a frequent issue with these garden hoses. The lever locks up and ceases to function, which makes the garden hose inoperable.

Another common failure location is in the rubber hose itself. Though DAP claims these units are tested to 250 PSI, they don’t say that the hose lasts long at that pressure, or any pressure for that matter. The hose will commonly burst like a balloon under normal pressures, seemingly at random.

Finally, the exterior housing on the hose can tear during normal, reasonably careful use. If the exterior protector is torn, the inner hose which holds the water is revealed. If that is exposed, it generally ruptures fairly quickly, rendering the XHose Pro useless.

The DAP Xhose Pro line is lightweight compared to other garden hoses, but this doesn’t with durability. If for some reason hose lightness is top priority to you, you could consider these, but we would suggest looking elsewhere.

When a product advertises “Professional Quality” and “As Seen On TV” on the box, these are warning signs that the product may not be the best out there. DAP offers no warranty on the XHose Pro, and while it will probably last longer than the standard 30 day return policy Amazon offers, it may not last much longer than that. 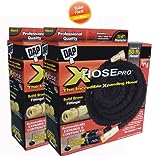 We strongly suggest you skip the expandable garden hose, as they just don’t work that well in practice. If you want to keep your garden hose contained and neat, go for a self-winding garden hose reel instead of an expandable hose.