LED lighting strings have been taking over Christmas tree and other holiday lighting market for years. They come with the usual benefits of this type of bulb: bright, cool light with a long life. They also, however, develop the usual problem: dead bulbs, defective sockets, and blown fuses- leaving many of us with a half-lit pre-wired strings of lights. The LED Light Keeper was invented with the goal of helping frustrated decorators find the bad spots in the strand, check it, and repair or replace the problem section or bulb. In this article, we’ll do an LED Light Keeper Review, and see if the magic of this idea holds up in real life.

Key Features at a Glance

The LED Light Keeper is a compact solution for dealing with those bundles of LED string lights that greet you at the beginning of the holiday season, or when you’re setting up for an outdoor party.

It’s quite possible that they were all functioning perfectly when you put them away last winter. It’s also just as likely that some of them won’t work when you first plug them in, or will have sections go out after you’ve done all the work of putting them up. Ugh, no fun!

In the past, diagnoising and fixing string light issues was a lengthy process. You would have to determine which bulb – or bulbs – had burned out, or replacing a fuse, or, more likely, just throwing out the whole strand out and starting over.

The LED Light Keeper gives you a way to test and repair with just one kit.

How the LED Light Keeper Works

Using the LED Light Keeper is not exactly a one-step process, but it is faster and more efficient than checking strands yourself by trial and error.

To check for bad sections of the strand, the user first plugs the string into a standard electrical socket to determine to which point the bulbs work.

Using one of the clip-on markers that are included with the kit, the unlit section is marked off, the strand is unplugged from the electrical outlet, and plugged directly into the Light Keeper unit.

Test with the LED Light Keeper

By using this function to narrow it down to the actual bulb involved, the suspect bulb can then be pulled out using the integrated bulb puller, tested right on the unit by plugging into the slot on the top of the Light Keeper, and correctly identified as the problem.

If the bulb is indeed defective, the user can replace it. If the whole socket is the problem, the Light Keeper gives the user the option of repairing the strand and removing the socket.

This is one area where the unit can really save the user money, and indeed was one of the things mentioned most often by those who frequently use the LED Light Keeper.

Repairing the strand in this manner requires the use of some scissors, and the included POD units that come with the Light Keeper. The wires are cut, the defective socket is removed, and the wires are rejoined by placing them inside the POD, which completes the circuit and allows the strand to keep on working.

It’s advisable to go ahead and order several extra PODS when you get the Light Keeper unit. 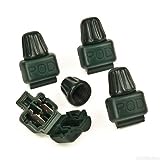 The LED Light Keeper does its work by piercing a tiny hole into the wire for testing. This is not dangerous. However, repeated use of the tester will possibly dull the probe. This is reversible, and the instructions for doing this are included in the User Manual.

Performing this task will require a small Phillips head screwdriver and a steady hand. The piercing unit is about the size of a ballpoint pen assembly and needs a bit of encouragement to remove and replace. This may be an issue if your mobility is impaired.

The LED Light Keeper by necessity must pierce the insulated housing around the wiring. This is because LED lights work on DC current, not AC current as incandescent string light sets work on. In order to detect the DC current, the LED Light Keeper must pierce the insulated housing. Of course, as mentioned above, the pierce point is about the size of a needle or ballpoint pen tip, and will not harm the wire (unless you do this a whole lot of times!).

Overall, regular users of the LED Light Keeper report that the unit does well at identifying the problem in unlit strands. It’s not an immediate process, but it certainly simplifies the steps of testing/retesting the bulbs, as well as providing an option to safely remove and patch the section of the strand with a defective bulb socket.

No assembly is required, and the unit comes with the 9V battery. It seems to be durable, providing that users follow the instructions for replacing the pin in the probe, and understand the limitations.

Limitations of the LED Light Keeper

Some reviewers complained about the unit not working on exactly these items.

If you are dealing with incandescent bulb string lights, the Lightkeeper Pro (reviewed here) will fix this style of bulb.

The LED Light Keeper is a faster way to troubleshoot and sometimes repair LED light strands, with some limitations. It will only work on standard LED strands and not any of the variations listed above.

If you do have a number of these type of lights and follow the instructions, the Light Keeper could easily offset the replacement costs of several pricey sets of holiday lights. And no one likes to continuously throw away their lights.

Fixing them is much more satisfying!